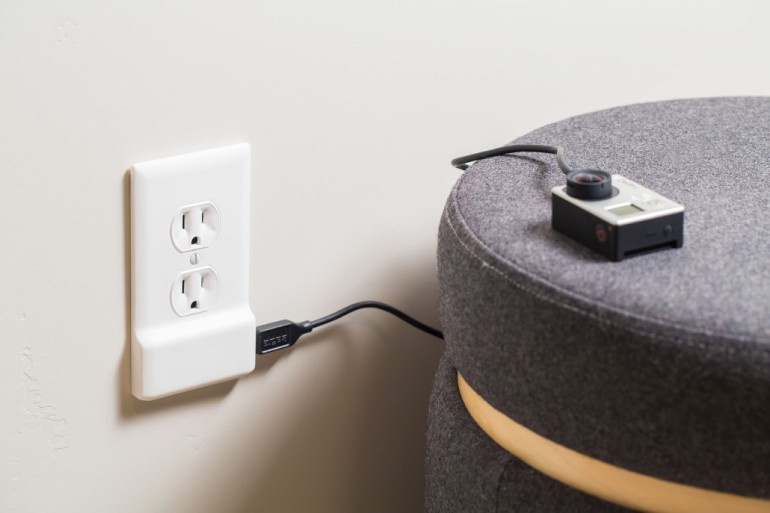 The latest gadget hit to make its way to Kickstarter is called SnapPower. The concept behind SnapPower is to have a USB charger built into conventional wall socket that can be used to charge any device, from your phone to your tablet and just about any other device that is powered via a USB cable. SnapPower is being created to solve an ever increasing problem, and that is our desire to own more and more gadgets and with more gadgets come more power adaptors. The issue with conventional power adaptors is that they are required for charging many of today’s devices, and are often not available to us in the most convenient fashion and can occasionally become misplaced.

The huge advantage of the SnapPower Charger is that we would be able to charge any of our USB based charging devices using a power outlet in any one room in our homes, without having to look for that ever elusive power adaptor. In itself the SnapPower Charger is hugely advantageous around the home, but its possibilities would be almost endless if it were to be mass adopted in a more commercial setting. For example, if you were going away for a bit and happened to forget your adaptor but had a spare USB cable, you could simply charge your devices from a power outlet in a hotel. Of course the added benefit of this is you wouldn’t have to carry your power adaptors around with you, but simply the USB cable.

The picture above shows just how practical this invention really is, as it doesn’t interfere with any other devices in your home as it is of course connected via its own socket, and therefore there are more free power outlets available to you should you need them. More information on the SnapPower Charger can be found on its official Kickstarter page.

While you may think the huge Jabba the Hutt was computer animated, in 1983 this wasn’t possible. In order to make Jabba the Hutt in Star Wars: Episode VI – Return of the Jedi, the team had to build an incredible full size puppet which weighed in at one ton, cost almost $500,000 and was operated by three puppeteers, all of whom were crammed inside Jabba’s body.

Puppeteers David Alan Barclay (who narrates the video below), Toby Philpott and Mike Edmonds (who all worked on the Muppets) were inside the enormous puppet, each with a separate task. One of them operated Jabba’s right arm and mouth, another controlled the left arm, head and tongue – and a final puppeteer was responsible for the movement of the tail. Jabba’s eyes and facial expressions were controlled by radio control.

As you can see from the following documentary by Jamie Benning (give him a tip for his amazing work making ‘filmumentaries’: patreon.com/jamiebenning), coordinating Jabba the Hutt’s movements proved especially difficult, as all the puppeteers could see from inside was a small monitor showing a feed from a single camera outside Jabba’s body.

Of course, in the very early days of Star Wars, Jabba the Hutt was portrayed as a man. In this original cut of Star Wars: Episode IV – A New Hope, you can see Jabba being played by Declan Mulholland. If you’re familar with the newer special edit of this scene, you’ll remember that a CGI Jabba the Hutt was added in.

Here’s another video narrated by Mark Hamill, which explains in more detail the story of Jabba the Hutt.

Hopefully these videos gave you a rare insight into the interesting story behind the incredible Jabba the Hutt puppet.